Each year the Society for Industrial Archeology recognizes outstanding scholarship in the field of industrial archaeology with the Robert M. Vogel Prize. Named for the founding and distinguished member Robert Vogel, the award honors the author of the best article to appear in the society’s journal IA within the past three years. The prize comprises a cash reward and a wooden foundry pattern with a plaque engraved with the recipient’s name. Articles selected must have a clearly stated thesis and a well-constructed narrative. Analysis of material culture and high-quality illustrations that support the thesis and conclusion are also important measures of scholarship worthy of the prize. Selection is made by the Vogel Prize Committee consisting of five members, appointed by the president of the SIA, who serve five-year terms.

Robert M. Vogel laid the foundations for the Society for Industrial Archeology. He was among the original founders of the SIA and sustained the organization in its earliest years. As the first editor of the Society for Industrial Archeology Newsletter, from 1971 to 1979, Robert stamped the SIA with his distinctive good humor and unbridled enthusiasm for industrial heritage preservation. In the 1960s, his seminal work on the New England textile mill and Hudson-Mohawk Valley surveys established important benchmarks for field recording and documentation, and led to the establishment of the Historic American Engineering Record. As an authority in the field and longtime curator of civil and mechanical engineering at the Smithsonian Institution, Robert generously shared his knowledge, inspiring countless others to champion, as he did so vigorously, the cause of “IA.” For these reasons and others, the SIA was pleased to name its annual prize for outstanding scholarship in industrial archeology in his honor.

History of the Award (extracted in part from SIAN Vol. 31/3-4 written by David Simmons)

Since its earliest days, the SIA has striven to promote high scholarship. When the idea for a prize emerged in the early 1980s, then SIA President Ted Penn set about beating the bushes to find a sponsor. Eventually, the Norton Co., the abrasives manufacturer based in Worcester, MA, agreed to fund the Norton Prize for the best article published in IA over the previous three years. First awarded in 1982, the prize included a check for $100. Later the prize winners and the titles of their essays were listed on the back cover of IA. In 2001, the Norton Co. discontinued its support of the prize and the SIA Board of Directors decided that rather than seeking a new corporate sponsor, it would be most fitting to rename the award in honor of Robert M. Vogel in recognition of his role as one of the original founders of the SIA and of his many contributions to the society. The renaming has also prompted several members to make unsolicited contributions in support of the monetary prize, which has been raised to $250. What had seemed noteworthy as a monetary prize in 1982, seemed paltry by 1997. At the annual conference in Houghton that year, outgoing Norton Prize chairman, Carter Litchfield, approached next year’s chairman, David Simmons, to discuss the possibility of augmenting the check with a physical award. As it happened later that same fall, the Montgomery County Historical Society of Dayton, OH, announced the sale of a large number of wooden foundry patterns donated to them by a local company, the Platt Foundry. The first of the new physical awards using these foundry patterns were given in 1998. 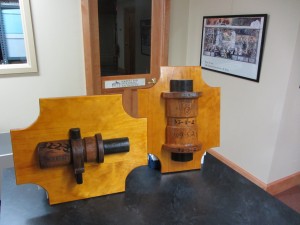 In 2013 the SIA ran out of the wooden foundry patterns from the Platt Foundry and obtained new foundry patterns for the award from the Cambria Steel Co. in Johnstown, PA. These patterns were made and used in the Cambria pattern shops until the works closed in 1992 and then became part of the collections preserved by the Johnstown Area Historical Association (JAHA).  Originally founded as the Cambria Iron Company in 1852, the firm became the Cambria Steel Co. in 1898 and eventually part of Midvale Steel in 1916 and then Bethlehem Steel in 1923. The iron and steelworks was one of the first in the nation to use the Bessemer process and was at one point the nation’s largest producer of iron rails. JAHA rescued hundreds of these patterns when the pattern shop was threatened with demolition and uses their sale to help fund ongoing heritage work at the Frank & Sylvia Pasquerilla Heritage Discovery Center, part of the Johnstown Discovery Network.  SIA would like to thank JAHA for partnering with us to provide original historic foundry patterns to continue the tradition of award plaques for the Robert M. Vogel Prize, which honors the author of the best article to appear in the Society’s journal, lA, within the past three years.

Past Winners: click on the links below for more details about the prize winners.