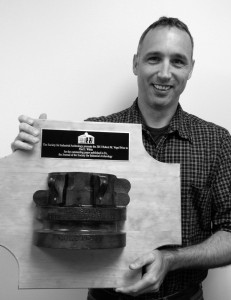 This year the Vogel Prize is awarded to Paul J. White for his paper “The Rise and Fall of the California Stamp: Historical and Archaeological Perspectives on the Aging of a Technology” published in IA volume 36 number 1, pp. 65 – 83.  Here Paul addresses an area in the history of technology where skillfully-collected material evidence fills a gap left when the documentary record fails us.  Writers in engineering journals typically focus on new technique; older methods that might be considered obsolete by the engineering profession but which can fill a useful economic niche are rarely accorded attention in the publications intended for practicing engineers and managers that are often the primary resource used by historians.  Nor are accounts of the adaptive re-use of past techniques likely to be mentioned in company reports.  Paul shows us how a detailed examination of an abandoned mill can reveal the ingenuity with which artisans made obsolete equipment economically viable.  The Skidoo mill in California processed hard-rock gold ore from 1908 through 1915 with methods that had been use in the western gold fields for half a century.  Despite its obsolescence when it was closed, several entrepreneurs found the remaining Skidoo mill machinery useful in intermittent operation for another twenty years.  We are fortunate that the location of the mill on an arid hillside adjacent to Death Valley allowed for the preservation of the milling equipment that was not removed for use elsewhere.   Paul’s detailed documentation of the stamps that processed the gold ore reveal how these machines were repaired and modified so as to keep them economically viable long after they would otherwise have been scrapped.  He carefully constructed his paper with an introduction to hard-rock milling technique that allows the reader not expert in extractive metallurgy to understand the detail of the stamp machinery that he then presents.  Paul’s paper shows his careful scholarship and his skillful exposition through effective use of photographs and an extensive set of notes.  It is also gratifying to see a HAER recording project serve as the basis of an interpretive paper that addresses a significant problem in the history of technology.