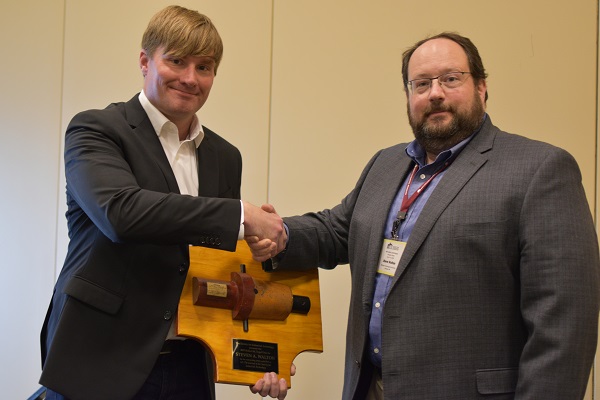 A key strength—really a point of pride—of industrial archaeological research, fieldwork, and writing is the opportunity to reveal forgotten machinery, sites, and landscapes of once-robust industrial systems. Past and present, mining, of course is just such an industrial system that is well suited to the approaches of industrial archaeology, as many issues of the Society’s journal will show. But mining has a lot of moving parts, and often just one of those parts formed a critical path that has been left ill-defined if not outright neglected. The 2019 recipient of the Vogel Prize, Dr. Steven A. Walton, uncovered a half-buried, forgotten part in his article, “Machinery to Match the Materials: Iron Ore Washing in Pennsylvania”, featured in Volume 41, Issues 1 and 2, a theme issue dedicated to the archaeology of industry in the Keystone State.

During his time as a professor at Pennsylvania State University, Steve Walton took a keen interest in how Nineteenth-Century ironmakers and ore miners in central Pennsylvania tackled the dilemma of concentrating, or washing, increasingly valuable brown hematite iron ore. In his article, he follows the rough 75-year arc of a regional solution to a peculiar mining problem. Walton does this step by step, first exposing the deficiencies of later contemporary authors, then positing that the leaps made in Pennsylvania iron production in the mid- Nineteenth Century were contingent on efficiently cleaning mud from ore. Then he takes his audience to the action. In detail, he gives an account of the invention and operation of the log washer, a kind of Archimedes screw that through water and agitation would strip clay and gravel from ore. But he spares no aspect of context: after describing the machinery, he explains in concise detail the economic geology that called for this approach, its spread to other regions in the nation, and the need by mining concerns to drill for water, build novel concentrating plants, disperse muddy waste, and compensate nearby farmers for land lost. He then traces how pioneering methods of ore washing were aggressively adapted and scaled up after the Civil War by outside interests, like Andrew Carnegie, looking to draw ore to the blast furnaces of Pittsburgh by the 1880s as a measure against high cost Lake Superior ores.

Steve Walton’s trademark diligence in archival research and analysis is worthy of imitation for any who engage in this work of ours. Yet his writing is by no means stilted; there are brief touches of humor that round the edges of his cradle-to-grave story. He is also careful to give attention where it is due, highlighting the role of public archaeology in documenting and appreciating the remains of an ore-washing site in Centre County, PA from 2010 to 2012. By these merits, Dr. Steve Walton has been awarded the 2019 Vogel Prize of the SIA.