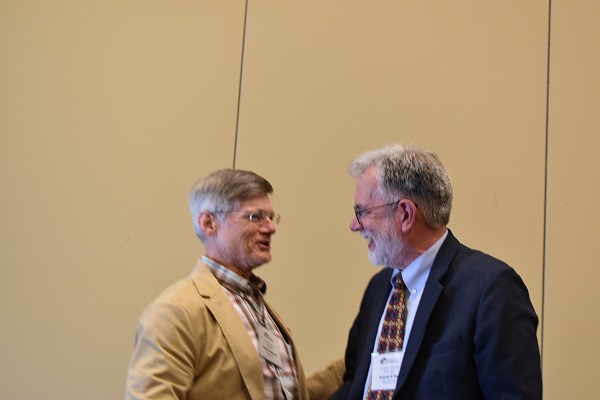 The General Tools Award is the highest honor that the SIA can bestow. The award recognizes individuals who have given sustained, distinguished service to the cause of industrial archeology. Criteria for selection are: (1) The recipient must have given noteworthy, beyond-the-call-of-duty service, over an extended period of time, to the cause of industrial archeology. (2) The type of service is unspecified, but must be for other than academic publication. (3) It is desirable but not required that the recipient be, or previously have been, a member of the SIA. (4) The award may only be made to living individuals.

The General Tools Award was established in 1992 through the generosity of Gerald Weinstein [SIA], chairman emeritus of the board of General Tools Manufacturing, Inc. of New York City, and the Abraham and Lillian Rosenberg Foundation. The Rosenbergs founded General Hardware, the predecessor to General Tools. The award consists of a cash prize and an engraved sculpture crafted from a General Tools plumb bob.

The recipient is selected by the members of the General Tools Award committee, based on nominations and suggestions from the membership. Committee members are appointed by the SIA President and serve three-year overlapping terms. I am completing my third and final year and will be followed by Patrick Harshbarger, Fred Quivik, and a player to be named later.

Our nominee for this year’s General Tools Award has been an officer, tour organizer, preservation advocate, and contributor to the field of IA in many ways over many years. He organized two SIA fall tours, served three terms on the Society’s Board of Directors, conducted systematic statewide inventories, advised multiple HAER teams, helped local groups organize their efforts to preserve historic engineering structures, presented more talks than I can count, and written and edited books and articles for SIA publications and those of other organizations.

A life-long resident of central Ohio, David Simmons started work with the Ohio State Historic Preservation Office in 1976 and joined SIA the following year. Over the next decade he wrote and edited National Register nominations and reviewed projects under Section 106 of the National Historic Preservation Act. Along the way he developed a special interest in historic bridges. Starting in 1983, he worked with the Ohio Department of Transportation to conduct four statewide historic bridge surveys. Based on that work, he started writing a regular column called “Historically Speaking” in a magazine published by the County Engineers’ Association of Ohio. This was an important audience because the fate of many historic bridges lie in the hands of county and municipal engineers.

In 1984, Ohio Historical Society, parent organization of the Ohio State Historic Preservation Office, began production of a lavishly illustrated large format popular history magazine called TIMELINE. David shifted to the TIMELINE staff in 1986, rising to become editor and eventually Senior Editor. He remained interested in bridges, engineering, and manufacturing and TIMELINE provided an outlet to share those passions with a broader audience.

David is a recognized authority on historic bridges. He is a certified bridge inspector in the State of Ohio and has served as a technical advisor on the Historic American Engineering Record’s Ohio Bridge Survey in 1986 that documented more than sixteen structures, on the Cast and Wrought Iron Bridges of Ohio Survey that recorded another seventeen in 1992, and on several other HAER projects. He organized eight historic bridge conferences in Ohio and was program chair for the Second National Covered Bridge Conference at Dayton in 2013. That year he was also invited to speak at the Taishun Covered Bridge Festival in Zhejiang Province, China.

David’s preservation work goes beyond regulation at the SHPO, advocacy and education through TIMELINE, or technical advice to HAER teams. He’s gotten in it up to his elbows. As President of the Ohio Historic Bridge Association he directed the restoration of the 1876 Johnson Mill Bridge over Salt Creek, the last remaining covered bridge in Muskingum County.

SIA colleagues admire David for his ability as a facilitator for preservation efforts. One wrote:

He has made an outstanding career encouraging, facilitating and advocating for the preservation of covered bridges, metal truss bridges and concrete bridges in his home state and beyond. He’s often been the person who brings the right people together at a community level to achieve a good preservation outcome.

His influence extends beyond Ohio. About twenty years ago, residents of Great Falls, MT, invited a team of bridge experts that included David, Eric DeLony, Pat Malone, and Fred Quivik to speak at a bridge symposium that became a rallying event to preserve the 10th Street Bridge — a magnificent multi-span open-spandrel concrete-arch bridge over the Missouri River. David helped strategize how to move forward.  The bridge was saved, and the Great Falls folks have done wonderful things with it.

The General Tools Award is for contributions other than academic publication, but appearing in print is not a disqualifying factor. WorldCat credits David with at least 25 works in more than thirty publications. He is co-author with Bill Heisel of Ohio Historic Bridge Guide: a traveler’s directory to the historic wooden, metal, stone, and concrete bridges of Ohio, which has gone through seven editions since it was first published in 1989, and more recently with Miriam Wood and William Michael Miller of Covered Bridges: Ohio, Kentucky, West Virginia (2007). He contributed his editorial talent to Covered Bridges and the Birth of American Engineering, published by the Historic American Engineering Record in 2015.

Three of David’s articles have appeared in IA: The Journal of the Society for Industrial Archeology: “Bridge Building on a National Scale: The King Iron Bridge and Manufacturing Company,” (Volume 15, No 2), “Bridges and Boilers: Americans Discover the Wrought-Iron Tubular Bowstring Bridge” (Vol 19, No2, Norton Prize winner 1995); and “The Continuous Clatter’: Practical Field Riveting” (Volume 23, No 2, Norton Prize winner 2000)

Many of us know David through his presentations at SIA conferences, where he combines thorough research and deep insight with killer deadpan humor. He also organized the 1996 Fall Tour, based in Columbus, and last year’s Fall Tour, based in Dayton. Some of you may remember the 1996 tour for its outstanding process tours, including Union Fork & Hoe, Timken Roller Bearing, Berry Brothers Bolt Works, and American Whistle, the only manufacturer of metal whistles in the U.S.  We were all tweeting and twittering as we left the small factory. Not surprisingly, David anticipated SIA members’ fondness for new toys and accepted it all with a wry sense of humor. Later, when one of the buses got stuck in the mud at our banquet site on Staley Farm, an old tractor lumbered into view to pull the SIA out of a sticky situation. David in his gracious way had it all under control.

David earned Batchelor’s and Master’s degrees from Miami University. His LinkedIn profile notes that he started as a music major, before crossing over to the dark side and becoming a history major during his sophomore year. I think that music’s loss has been IA’s gain and invite you all to join the committee in recognizing David A. Simmons as this year’s General Tools Award recipient.