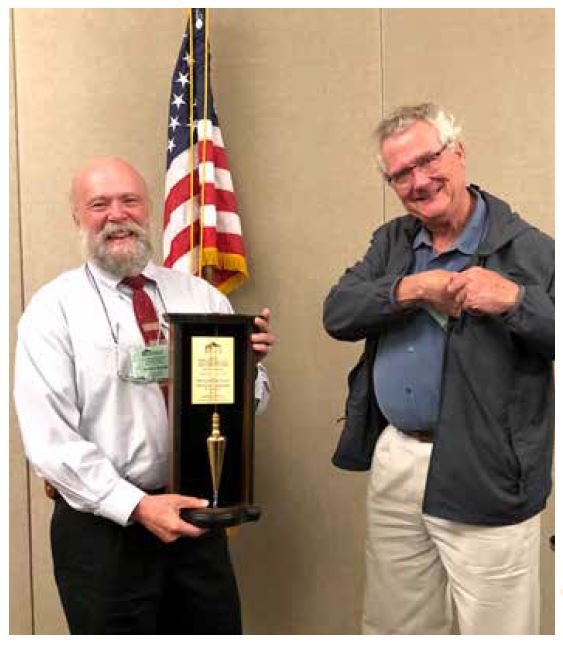 Fred Quivik has been an officer, editor, tour organizer, and contributor to the SIA in so many ways that this award seems long overdue. He has organized several fall tours, including one to China, he has written and edited many articles and histories that have appeared in our journals, and he may have succeeded in altering how we think of our field of industrial archeology. His rigorous background in environmental and industrial history enabled him to become an expert witness for the Department of Justice in sorting through the legal complexities and liability issues surrounding mining and smelting properties. This in turn has expanded the way we all might think about how the analytical work of industrial archeologists can assist in resolving complex legal issues resulting from industrial and mining activities.

Whether creating a Fall Tour such as he did in Butte, Mont., or another one of Eastern Montana that included mixed missile silos and a mermaid bar, Fred has enlightened his colleagues with his deep knowledge and understanding of a site. He brings his multiple perspectives of social, environmental, and technological history together and shows how each affects the others.

Several of my experiences working with Fred have helped me set a bar for what it takes to get a job done. I am not sure of the order in which these projects occurred, but I will say the first bar was set working with Fred photographing the head frames of Butte in January of 1979 or 1980. I guess that for Butte, -8°F was not as cold as it gets, but that seemed to be the limit at which the shutters of my camera would perform. It certainly set a standard for the cold I could endure while in the field. Later, in the spring of 1979, we drove 4,000 mi. in two weeks as we photographed some 20 bridges in Montana.

Sometimes I would sleep in the back of the wagon, and Fred would wake me up when we arrived at a bridge somewhere in the middle of the state. In between bridges, Fred would enlighten me on the engineering expertise of O.E. Peppard or the unique engineering features of James Hill’s Milwaukee Road railroad right-of-way. While photographing one of these railroad bridges, we got caught in the middle of the span with a freight train speeding towards us at 80 mph. There was not enough time to get off the bridge; a glacial river flowed 90 ft. below us should we have jumped, but fortunately and thanks to OSHA, there were platforms one could stand on, allowing mere feet between us as the train blurred by. Both projects were a model for getting work done efficiently in the most trying of conditions. I am certain that Fred’s insights on various projects have inspired other professionals to elevate their work above the norm. I conclude by quoting Carol Poh in her email to me regarding Fred’s work with the SIA: “It is through his scholarship and his selfless contributions in the realm of continuing education in the material culture of IA—tours, one of the four pillars of the SIA—that he has enriched and furthered the field and the Society.”

Put another way, Fred has contributed hugely to our organization in countless ways, but perhaps most importantly, Fred has expanded the way we think about our field. With great pleasure, we present him with the 2018 General Tools Award.